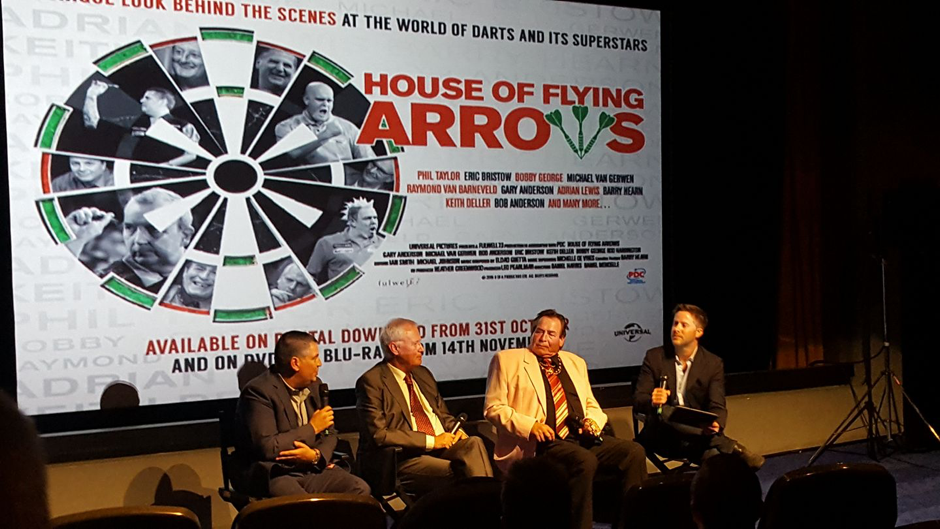 “Anybody who spends enough time in this world playing around with numbers can achieve great things.”

Professor Marcus du Sautoy, the Simonyi Professor for the Public Understanding of Science, isn’t the sort of man you’d expect to encounter in a feature documentary about darts – come to think of it, darts is a fairly unlikely subject for a documentary – yet there he was, on the same credits roll as former players Eric Bristow and Bobby George.

But Professor du Sautoy is probably right; consider the example of Bill Gates and the decision he made one day to start dabbling in zeroes and ones.

Barry Hearn, on the other hand, is a man who makes sure the numbers work for him.

Hearn qualified as a Chartered Accountant in 1970 but these days he’s the Chairman of the Professional Darts Corporation (PDC) and he looked at home on the red carpet for the premiere of House of Flying Arrows, which follows two players – Michael van Gerwen and Gary Anderson – in their respective bids to win the PDC World Championship 2016.

Produced by Fulwell 73 and directed by Daniel Harris and Daniel Mendelle, House of Flying Arrows doesn’t solely rest on the shoulders of van Gerwen and Anderson and their quest for glory and a first prize of £300,000.

Instead, its mission is to examine and explain the popularity of a sport that is played against a backdrop of sell-out arenas even though the action is not visible to the naked eye of the vast majority inside, and despite the oddity of the main protagonists performing their art with their backs to the crowd.

“The movie tries to explain why this makes sense today,” Hearn said.

“It might not have made sense 20 years ago but it’s looking like it’ll be making sense all over the world for the next 20.”

The creative opening credits are a nod to the fact that people have been throwing darts for centuries; Anne Boleyn presented King Henry VIII with a set, before he developed his association with more dangerous metal objects, and the Pilgrim fathers are said to have had darts on the Mayflower when they set sail for the New World in 1620. Almost 400 years on, darts itself is conquering the globe.

But how has darts made its astonishing transition from being a game played in British pubs and working men’s clubs to one that is now played in venues normally reserved for pop stars?

“The quality of play and the atmosphere that’s generated at darts events has become so conducive to the millennial market,” opines Hearn.

“Most people know darts is, on the face of it, a simple sport but they appreciate it actually requires extraordinary ability because most people have, at some point in their lives, thrown a dart at a dartboard.”

All well as that statement being true of King Henry VIII and the Pilgrim fathers, it’s even true of Her Majesty The Queen Mother and it’s certainly true of van Gerwen (pictured below), who is happy enough to reveal one or two of his tricks of the trade from the intimacy of his local cafe in the Netherlands. 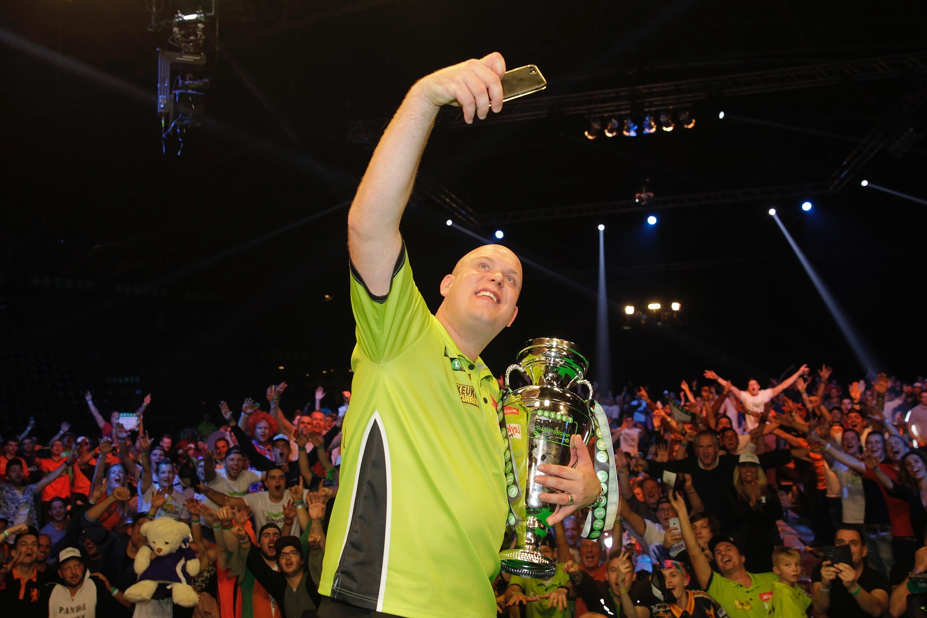 “I don’t aim,” admits the world number one when talking us through the motions of his throwing arm. In a similar vein Anderson, who confesses to vomiting before matches, explains why he chooses not to wear his glasses on the oche, effectively rendering him blind.

Cue Dr Stephan Waldert from the Institute of Neuroscience at UCL to illustrate the physiological qualities that are evident in the make-up of the world’s best players. The psychological aspect is left to the 16-time world champion Phil Taylor and, to a greater extent, a very engaging James Wade, who talks openly about his bipolar disorder, ADHD and the suggestion he is on the autism spectrum.

Inevitably, in pursuit of an explanation for darts being, according to the commentator Dave Lanning, “one of the most spectacular, unlikely success stories of the past 50 years”, a segment is devoted to the sport’s infamous schism involving the world’s top players and the British Darts Organisation’s former oligarch Olly Croft in the early 1990s.

What seems astonishing now is that this rejection of darts by the BBC – who, amid allegations of snobbery, started to turn its back on darts in the late 1980s – began less than a decade after the pivotal 1980 World Championship final between Bristow and George, with commentator Sid Waddell providing the equally-influential backing track.

“That match, and its broadcast, changed the game,” says George. “Before that, it was like playing darts in the doctors’ waiting room. Everyone was so quiet.”

Harris and Mendelle give ‘the split’ just about the right treatment without ever threatening to venture into the territory of BBC2’s Blood on the Carpet treatment of the split by the World Darts Council (the PDC’s forerunner) from the BDO in 1992/93.

But the film does emphasise the point that it still required something extra to transform darts into what it is today.

And that ‘something’ duly arrived when Hearn – the mastermind of snooker’s transformation into a major TV attraction in the 1980s – made a visit to the Circus Tavern in Purfleet for the World Championship in 1997.

“I can just smell the money,” Hearn told the tournament director.

Less than five years later, Hearn was the chairman of the PDC and in position to, according to Wade, “deliver everything he says he’s going to deliver, every time.”

One factor that isn’t stressed enough is the direct correlation between prize money and three-dart averages.

Hearn says, “They (the players) must have enough money in their pocket to justify giving us what we want, which is world-class sport.

“They’re throwing averages that have never been seen before. People are leaving tournaments in their hundreds of thousands with smiles on their faces.”

Running parallel to all this is the sizeable acknowledgement of how darts has turned into a unique ‘event’ where “the crowd are almost as much of the show as the players themselves”, far removed from the cardigan and comb-over brigade eloquently referred to by Waddell’s son Dan and illustrated perfectly in one of several pieces of archive footage.

Yet it is Harris and Mendelle’s choice of ending that best encapsulates why darts is evolving in the manner it is. Ten days after the World Championship final at Alexandra Palace, 400 players from all over the world descended on a leisure centre in Wigan for four days of brutally intense competition called Q School.

With livelihoods on the line, it’s darts’ equivalent of the Oxford Entry Exam and only 30 will secure what Hearn calls “Willy Wonka’s Golden Ticket” – the Tour card that gives darts players a rite of passage into the PDC’s ProTour events and the chance to take on the very best on a regular basis.

And it’s that attainability and the ability to emulate, according to Hearn, that is one of darts’ biggest strengths.

“There’s an affinity that develops for ordinary people who are playing world-class levels of sport who, at the same time, remind you of somebody who lives just round the corner from you.”

This view is perfectly supported by an eye-catching sequence in which van Gerwen and Anderson attend exhibition matches, in the provincial towns of Oldham and Irvine, to take on local players and members of the audience something akin to Usain Bolt taking part in a school sports day.

And the message of the film, and the PDC, is clear. Success is not dependent on talent scouts or being in the right place at the right time. You don’t need hundreds of thousands of pounds in sponsorship because darts is accessible to all and there’s a system in place to ensure hard work and talent will not go unrewarded.

House of Flying Arrows will alter many people’s perception of darts whereas those who already love the sport will say such a dedication was long overdue.